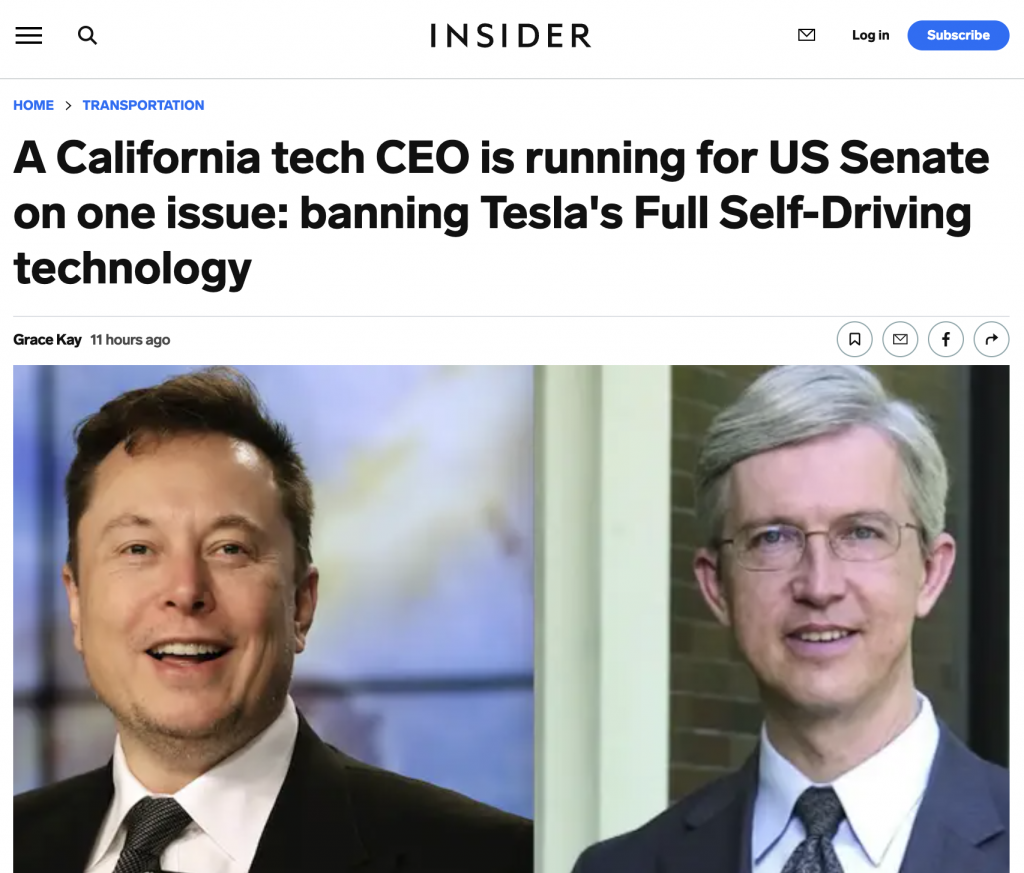 California tech executive Dan O’Dowd is running for US Senate on one issue and one issue only — outlawing Tesla’s self-driving vehicles.

“[Autonomous driving software] is probably the most important piece of software out there,” O’Dowd told Insider. “Billions of lives will depend on this software to not screw up on a daily basis. It should be the best software ever written, but it’s not.”

Tesla did not respond to a request for comment from Insider, but Tesla CEO Elon Musk has said FSD will be safer than human driving by the end of the year.

O’Dowd is the CEO of Green Hills Software, a company that builds operating systems and programming tools for embedded systems. While the executive told Insider that his company does not make self-driving software and has no financial interest in Tesla’s FSD, Green Hills has built technology for driving systems, including driver-assist software for the BMW iX.

‘I want to take the issue to the people’

According to O’Dowd, his bid for senate is an attempt to hold Musk accountable and abolish the use of Tesla’s FSD entirely. The technology is controversial among critics, who claim its name is deceptive and that the feature is dangerous to passengers and pedestrians.

Insider has previously reported on YouTube videos from Tesla drivers that show the software allowing cars to turn into oncoming traffic and struggle to accommodate pedestrians and road construction.

O’Dowd said he was inspired to take action after viewing these videos. In January, he took out a full-page advertisement in The New York Times announcing the launch of The Dawn Project, a campaign to ban unsafe software from safety systems.

In the ad, he accused Musk of using FSD drivers as “crash test dummies.”

O’Dowd told Insider people have an intrinsic faith in the government to prevent unsafe products from hitting the market, but they’re being let down because “Tesla skates by regulations.”

“I want to take the issue to the people,” O’Dowd told Insider. “I want the politicians to see that there’s an issue here that gets votes.”

O’Dowd said The Dawn Project analyzed video footage of FSD in action and found that the software acts up about every eight minutes.

The controversy behind FSD vehicles

Though FSD claims to be fully self-driving, in reality it operates as an optional add-on that enables Teslas to automatically change lanes, enter and exit highways, recognize stop signs and traffic lights, and park.

The product, which is in beta mode, can be purchased as a $12,000 add-on or $199 monthly subscription and requires a licensed driver to monitor it at all times. The software has about 100,000 subscribers who Tesla can use to test the software in real time and allow the system’s AI to learn from experienced drivers.

Since FSD was launched in 2014, the company has been able to avoid reporting data like disengagements and accidents to the Department of Motor Vehicles. This is because the system is classified as a level-two driver-assist system, unlike autonomous competitors like Alphabet’s Waymo which are subject to different reporting standards since drivers are not required to monitor the vehicles.

According to O’Dowd, there has not been enough oversight placed regulating FSD and preventing potential accidents, as seen in the YouTube videos.

“The worst part is the people publishing those videos are fanboys,” O’Dowd told Insider. “There’s all these videos of the software making these critical mistakes, doing terrible things, and these people just overlook it because they love Tesla.”

The CEO’s Senate bid could throw a wrench in Alex Padilla’s run for office, California’s appointed junior senator. While it’s unclear if O’Dowd is using his candidacy merely to draw attention to the issue — since being on the ballot allows a higher degree of first amendment protection for his statements on Tesla — he told Politico he would drop out if FSD was pulled off the road for an extended period of time.