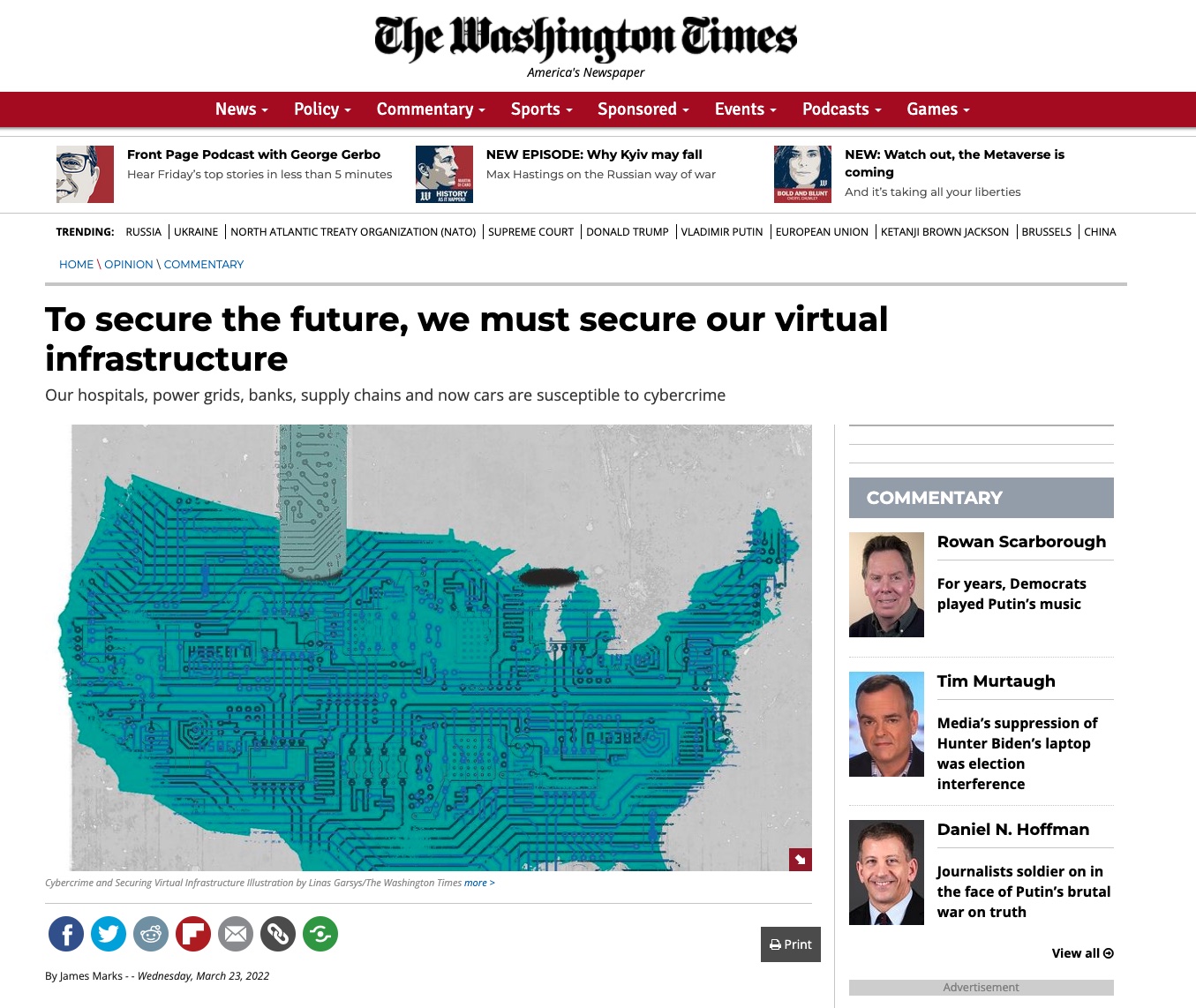 Founder of the Dawn Project Dan O’Dowd has been featured in a Washington Times editorial about the need to secure safety critical infrastructure.

This article was published in The Washington Times on 23 March 2022, and can be found here.

If there is one defining aspect of this era, it is the global commitment to connecting to the internet. In 2016 the U.N. General Assembly passed a non-binding Resolution that “declared internet access a human right,” paving the way for an even faster transfer of life online. This commitment has been amplified in recent years by forced lockdowns that have pushed more aspects of our lives online than ever before.

Generally, this is a good thing. The world is more accessible, efficient, creative and convenient for everyone.

Businesses moving online have allowed parents to work from home and spend more time around their families. No longer does one have to drive to the bank to manage their money; most people can manage their financial responsibilities from their computers or phones even. However, there is a glaring issue with this rush to move online.

Because of this discrepancy between connectivity and security, the systems our lives depend on are more vulnerable to malicious actors than they ever have been before. Our hospitals, power grids, banks, supply chains and now cars are susceptible to cybercrime and cyber terrorists.

We are slowly starting to see the consequences of this proliferated vulnerability. In 2015, Russia was able to hack into Ukraine’s power grid and wreak havoc. Their malicious cyber strike caused power outages for roughly 230,000 consumers in Ukraine for hours in the middle of the winter. With tensions rising once more in Ukraine, it is easy to fear another hack of the same or increased effectiveness.

Now imagine this on an even larger scale. Think back to catastrophic power grid problems in Texas last winter that lasted weeks and left chaos in its wake. Imagine if a malicious third party were to perpetrate such an act and with no intent to stop.

Just last year, Russia was also able to hack into approximately 100 U.S. companies by hacking into Solar Wind, a Texas-based company. The full extent of the damage caused by this brazen violation of national security is still under investigation.

This is just a glimpse of what we could be up against if we do not prioritize making our software as safe as it is convenient.

In a recent CNBC interview, Dan O’Dowd, a renowned software developer and founder of the Dawn Project, warned about another piece of our critical infrastructure that is shockingly vulnerable: self-driving cars.

Imagine the absolute chaos that could be caused by one malicious actor with the ability to hack into and control an entire fleet of Teslas all at once. Elon Musk, Tesla’s founder, warned of this notion in 2017 at the National Governors Association in Rhode Island, where he confirmed that a “fleet-wide hack” is one of Tesla’s biggest concerns.

For good reason, it is their biggest concern, as hacking their vehicles has proved to be a scarily easy task. In recent years, a hacker was able to take advantage of the software running Supercharger stations, which he exploited to take control of an entire fleet of Teslas. He created what is known as a “bug chain” that worked its way to Tesla’s home server, which is used to communicate with its customer fleet.
Luckily, this hacker was a good Samaritan and a hobbyist, not a terrorist or maligned foreign actor. Tesla dodged a bullet.

It is a clear problem in need of a rapid solution. We need to raise the bar for the software that runs our critical infrastructure if we are to safely innovate into the future. Security software enhancements must be a priority, an essential developmental requirement.

Our nation’s virtual borders must be as strongly defended and protected as our physical ones.