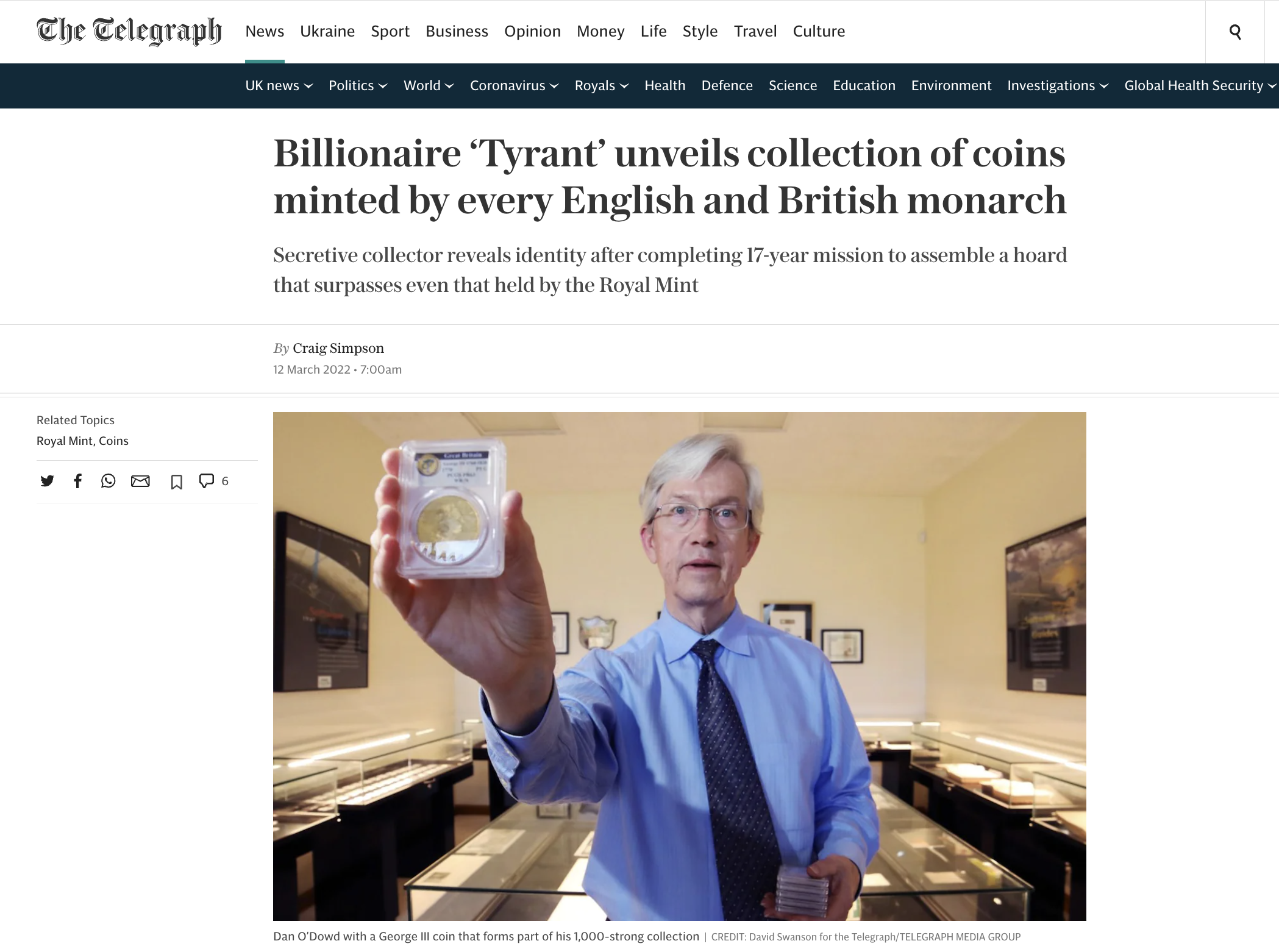 Our Founder, Dan O’Dowd, was interviewed by The Telegraph about his ‘Tyrant Collection‘, the world’s most valuable collection of coins.

A tech billionaire known as “the Tyrant” has finished the first coin collection spanning the entirety of English and British history, with an array of currency more complete than that of the Royal Mint.

Coins minted by every monarch – all the way back to 7th-century Anglo-Saxon kings – have been compiled by the secretive collector to form part of a £300 million set known as the “Tyrant Collection”.

The mysterious figure behind the set, until now known only as “the Tyrant” in the numismatic community, has been unmasked as a US tech billionaire who has spent the past 17 years assembling the most valuable coin hoard in the world.

Dan O’Dowd kept both his identity and his ambition to own a coin featuring every English and British monarch secret to avoid being held to ransom on the price, but the designer of software for fighter jets has revealed himself after completing his dreamed-of collection.

He said: “Bill Gates builds a house, Jeff Bezos builds a yacht, everybody has something they want to do. I didn’t really want to buy a yacht because I get seasick. I collect coins.

“It’s my hobby, it’s my release. It’s completely separate from everything I do in business. It’s just something that’s always fascinated me.”

The founder of Green Hills Software, which provides technology for nuclear bombers, is worth around £1.5 billion, and has been collecting the world’s rarest coins since 2005. His 1,000-strong collection of coins minted by this country’s rulers has examples dating back beyond the Royal Mint’s 1,100-year history, and includes currency issued by obscure 7th-century Kentish king Eadbald, and Mercian ruler Offa.

Encompassing currency from the nine-month rule of Harold Godwinson, and surviving pieces from the brief reign of abdicant king Edward VIII, the Tyrant Collection is the largest in private hands and rivals that of institutions such as the British Museum.

Mr O’Dowd, who ordinarily keeps a low profile because of his military and government work, has managed to keep his passion for coin collecting equally secret. He said: “When you build a coin collection, if you’re too big, and people find out what you are doing, they can hold you up.

“If anyone knew what I was doing, the collection I was trying to build – they could charge me whatever they want. They could extort me on every coin because they would know I needed that coin or I wouldn’t have the complete set. I did it completely in secret. Nobody knew there was even a collection being built, so I managed to get it without being taken advantage of.”