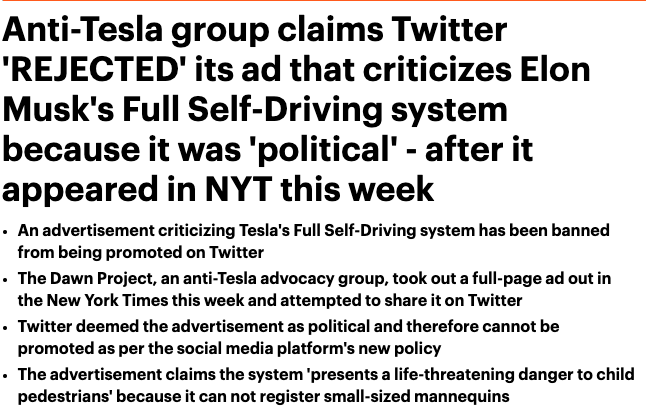 The Mail Online has covered the news that The Dawn Project has been banned by Twitter from advertising its recent full page ad in the New York Times, citing that the ad was too “political” to be promoted on Elon Musk’s Twitter.

The article was published in the Mail Online on 8 November 2022, and can be found here.

The Dawn Project, an anti-Tesla advocacy group, recently took out a full-page advertisement in the New York Times that claims the carmaker’s Full Self-Driving system ‘presents a life-threatening danger to child pedestrians.’

The group attempted to promote the ad on Twitter, but received a notification that it was not approved due to being ‘political.’ However, its founder posted the advertisement to his account and it has yet to be taken down.

The advertisement discusses testing conducted by the group in October, which claims to show the system does not register or stop for small mannequins crossing a road.

A spokesperson for The Dawn Project told DailyMail.com that Musk’s takeover of the social media platform ‘seems to have brought about this change, which is one of the first instances of its kind since the takeover.’

‘Dan [O’Dowd, founder of The Dawn Project,] and The Dawn Project have promoted tweets in the past highlighting the many dangers of Tesla Full Self-Driving, which have previously been approved by Twitter,’ said the spokesperson

‘They have promoted tweets drawing attention to the defects of Tesla FSD, which have not been suppressed in the past.’

‘Dan is planning to appeal the decision to ban the tweet, as the issue represents a vital public safety concern.’

Twitter’s policies do not allow political content to be promoted on the platform.

‘We have made this decision based on our belief that political message reach should be earned, not bought,’ Twitter’s support page reads.

‘Ads that contain references to political content, including appeals for votes, solicitations of financial support, and advocacy for or against any of the above-listed types of political content, are prohibited under this policy.

‘We also do not allow ads of any type by candidates, political parties, or elected or appointed government officials.’

O’Dowd, however, has had it out for Musk for quite some time and even ran his Senate campaign earlier this year with a focus on the carmaker – specifically that ‘Tesla software is terrible.’

The Californian native ‘began to test Tesla’s FSD software following observations that the software critically malfunctioned every eight minutes, based on research conducted by The Dawn Project, and has since continued to test the technology to ensure that public roads remain safe from defective and experimental pieces of software,’ The Dawn Project spokesperson told DailyMail.com.

O’Dowd owns Green Hills Software that produces software for many of Tesla’s major competitors, including GM, MBW and Ford, The Verge reports.

Tesla supporters have come to Musk’s aid, noting that O’Dowd’s advertisements are ‘slander for financial and personal gain.’

Musk and O’Dowd have exchanged words on Twitter in January about The Dawn Project’s allegations.

The new Chief Twit shared: ‘ Green Hills software is a pile of trash.’

O’Dowd responded: ‘When @elonmusk is wrong he always resorts to insults, remember the pedo guy?’

The latest advertisement discusses how Tesla’s system allegedly does not stop for child-sized mannequins while on the road.

Using the Tesla Full Self-Driving Beta 10.69.2.2, which is the latest version of the system, the vehicle collided with a 29-inch mannequin at speeds as low as 15 miles per hour and it ran over a four-foot-tall one at 20 miles per hour.

The Dawn Project conducted a similar test in August and notes the new results confirm those shared in the commercial, which sparked Tesla to send a cease-and-desist order over.

However, the news that the ad was rejected comes after several Twitter accounts were banned for impersonating Musk, including comedian Kathy Griffin and Mad Men actor Rich Sommer.

The accounts were suspended for challenging Twitter’s new policy against impersonation by changing their profile name to ‘Elon Musk’ without making clear it was parody account.

The new policy was put in place after some celebrities changed their Twitter display names in reaction to the billionaire’s decision to offer verified accounts for $8 a month.