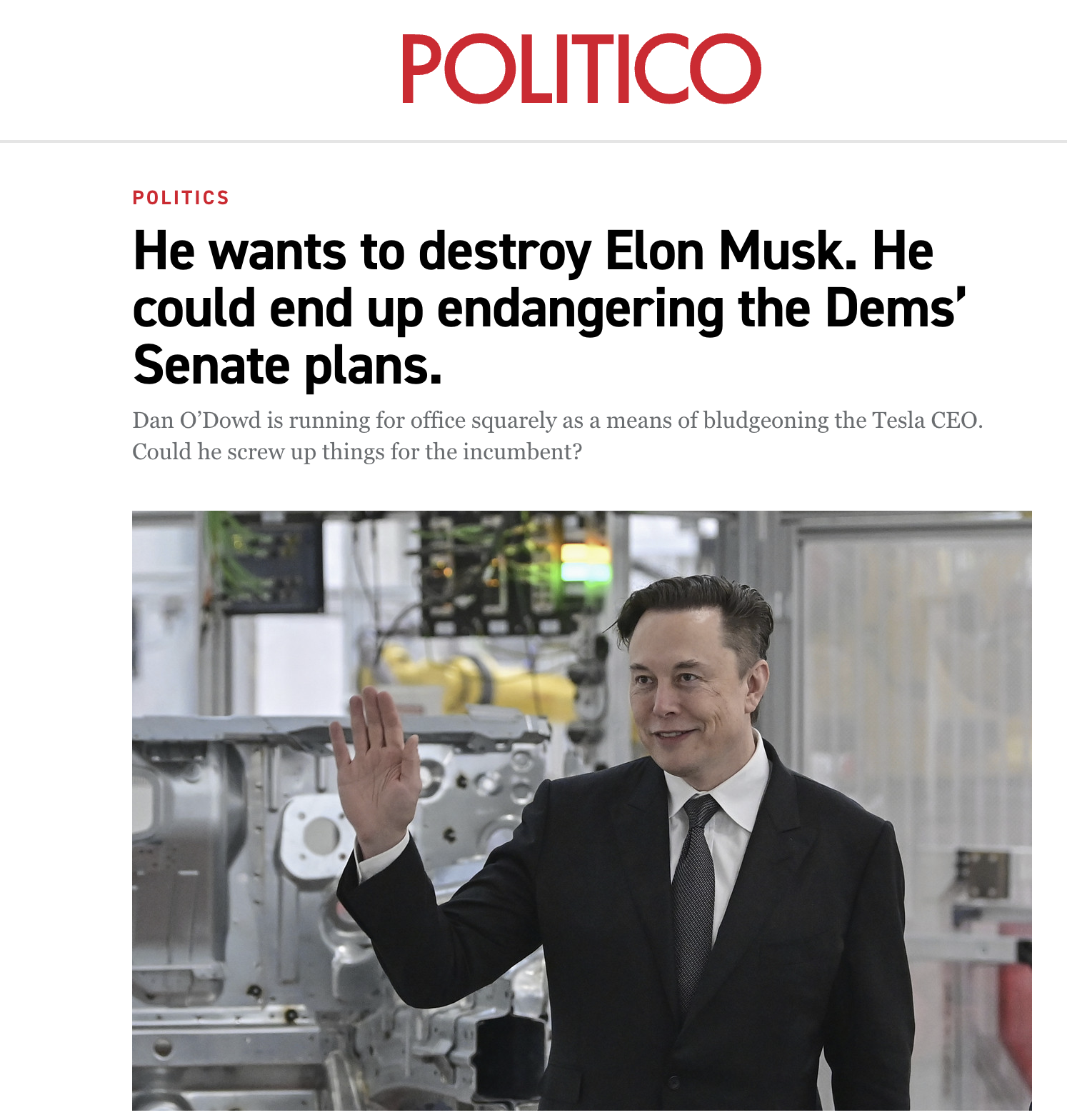 LA JOLLA, Calif. — A California software magnate is preparing to spend potentially millions of his own dollars on a brutal crusade to take down Elon Musk —and he’s doing it all as part of a quixotic and below-the-radar campaign for the U.S. Senate.

Dan O’Dowd, founder and chief executive of Green Hills Software and a self-described billionaire from Santa Barbara, has in recent days reserved nearly $650,000 in TV airtime to run in the state, according to data from ad-tracking services obtained by POLITICO. Separately, three people familiar with O’Dowd’s plans, including a national Democratic official working to protect Senate incumbents, told POLITICO that it’s just the start of a barrage of ads from O’Dowd targeting Musk and Tesla over its self-driving technology. Green Hills makes competing software to Tesla’s and O’Dowd has publicly derided Musk’s electric vehicles as poor performing and dangerous. Musk has responded with broadsides in kind.

But it’s not simply a personal vendetta driving the new electoral consideration and accompanying spending. O’Dowd has filed paperwork to run for office and his name will appear on the California ballot. Two of the people with knowledge of his strategy said that he has hired experienced Democratic consultants to help guide the campaign. His team, those people say, includes the celebrated ad maker Mark Putnam and O’Dowd has received help from veteran operative John Blair, moves underscoring his seriousness and raising questions about his political ambitions. O’Dowd and his team wouldn’t speak on the record or didn’t respond to inquiries. People who have been in contact with O’Dowd said Friday that they expected he would give clarity about his run in the coming days.

Others familiar with the rollout stressed that O’Dowd’s team has privately been adamant he’s not trying to unseat freshman Democratic Sen. Alex Padilla, who was appointed last year when Kamala Harris ascended to the vice president job. Instead, O’Dowd’s play for the Senate is likely being carried out as a cost-saving measure and to significantly enhance the likelihood that networks will air his TV spots. Running for office entitles him to the lowest available ad rate in the run-up to the election — a perk that could save him considerable money depending on the ultimate spend. But a bigger advantage, two people familIar with his plans said, is the higher degree of first amendment protection a political run could give him for his loaded claims against Tesla.

O’Dowd, who is running as a Democrat and previously launched a Senate bid in the 90s, has a broadcast reservation starting the week of April 18 and continuing at least through the following week, the records showed.

Though those around him insist he’s not trying to actually win election, the sheer magnitude of O’Dowd’s planned spending, combined with an election system in California that allows the top-two candidates regardless of party to advance to a runoff, is sending shock waves through the Democratic party in California and Washington.

“All signs point to this guy being able to write an eight-digit check to this effort. And that could create the saturation and penetration you need to make something happen in California,” one of the people, a Democratic Party official, said.

Democrats fear that O’Dowd’s ad campaign alone could land him in a runoff — potentially complicating what until now was viewed as a straightforward path forward for Padilla. While Padilla is well-liked among Democratic voters, rising from a councilman in Los Angeles to the Capitol in Sacramento and then to secretary of state, he is far from a household name statewide.

A self-funded TV blitz focused on drivers’ safety and vilifying Musk’s company could resonate with casual voters. That’s especially true at a time when the electorate is turning against the status quo and Musk has turned himself into the bête noire of Democratic politics, even more so amid his current attempts to buy Twitter and turn it into a private company.

A representative for Tesla did not return a request for comment.

At minimum, an O’Dowd run could leave California’s first Latino senator fighting more than he otherwise needs to for the seat, and cause headaches for Democrats when they’re trying to retain their razor-thin Senate majority in states that are legitimately competitive.

“These self-funded candidates put no limit on their aspirations and can buy their way into elected office,” said Yvonne Gutierrez, managing director at Latino Victory Project, which advocated for Padilla’s appointment to the Senate in early 2021. Lately, the group along with others have been picking up on the increasing chatter about O’Dowd. “With respect to Sen. Padilla, it does pose a real danger because they have the resources to be on the air 24/7.”

Added Gutierrez: “We are proud of the work [Padilla’s] done and [are] dedicated to keeping him here. So we’re all hands on deck because we can not take anything for granted.”

A Padilla campaign spokesperson said he’s focused on continuing to deliver for Californians. The Democratic Senatorial Campaign Committee issued a statement of support from its chair.

“Alex Padilla is key to maintaining and expanding the Senate Majority, and I am proud to endorse him on behalf of the Democratic Senatorial Campaign Committee,” said DSCC Chair Sen. Gary Peters (D-Mich). “Alex is a powerful addition to the United States Senate because of his life experiences and the important fights he takes on, especially for immigrant families. Californians are well served by this proud son of immigrants and the impact he is making for his state and country. We look forward to Alex’s reelection and continued success that is driven by his deep concern for his constituents.”

Padilla has about $7 million banked for his first Senate run, and California’s expensive media markets require heavy spending to move the needle even marginally.

Operatives and allies closely aligned with Padilla stressed that the coming ads in his race should motivate voters and jumpstart more aggressive fundraising on his behalf. They also argued that even if O’Dowd’s single-issue round-house kick to Tesla doesn’t violate election laws, which legal experts said on its face it doesn’t appear to, it’s a damaging tactic that undermines the democratic process.

“It allows them to use elections as ’pet projects,’ said Angelica Salas, executive director of the Coalition for Humane Immigrant Rights of Los Angeles, another close ally of Padilla’s office.

Salas said she doesn’t expect O’Dowd to be successful: “Most people aren’t billionaires and they will see right through what this really is about.”

Still, Democrats in recent weeks have privately urged O’Dowd not to follow through on his spending plans, the two people familiar with the discussions said. But they still came away with the feeling that he didn’t grasp the potential unintended consequences and didn’t believe his assault on Tesla would pose a real threat to Padilla. The people said his team made clear that not only did he not wish to beat Padilla, but that he supported his reelection and may say as much publicly.

Already, O’Dowd has been tweeting a stream of web videos of Teslas crashing. Earlier this year, he placed a full-page ad in The New York Times against Musk that assailed Tesla’s technology as “the worst software ever sold by a Fortune 500 company” and warned users not to be the company’s “crash test dummies.”

Musk responded in a January tweet, dismissing O’Dowd and his company. “Green Hills software is a pile of trash,” he wrote.

O’Dowd has denied his criticisms of Tesla are driven by his own financial interests. Green Hills Software, in an announcement around the time O’Dowd’s ad ran in the Times, stated that its products and design services were being used in BMW iX models.

On the website for his Dawn Project, O’Dowd claims to be the world’s leading expert in creating software that never fails and can’t be hacked — including secure operating systems for projects including Boeing’s 787s, Lockheed Martin’s F-35 Fighter Jets, the Boeing B1-B Intercontinental Nuclear Bomber and NASA’s Orion Crew Exploration Vehicle.

The site also posted a question-and-answer section with O’Dowd where he’s asked why, if he’s been so successful over 25 years, he isn’t yet a billionaire?

“I am a billionaire, but my software has been mainly used by the military, and I have kept a low profile until now,” he replied.

This article was published on Politico’s website, April 16 2022. Read the full article on the Politico website here.