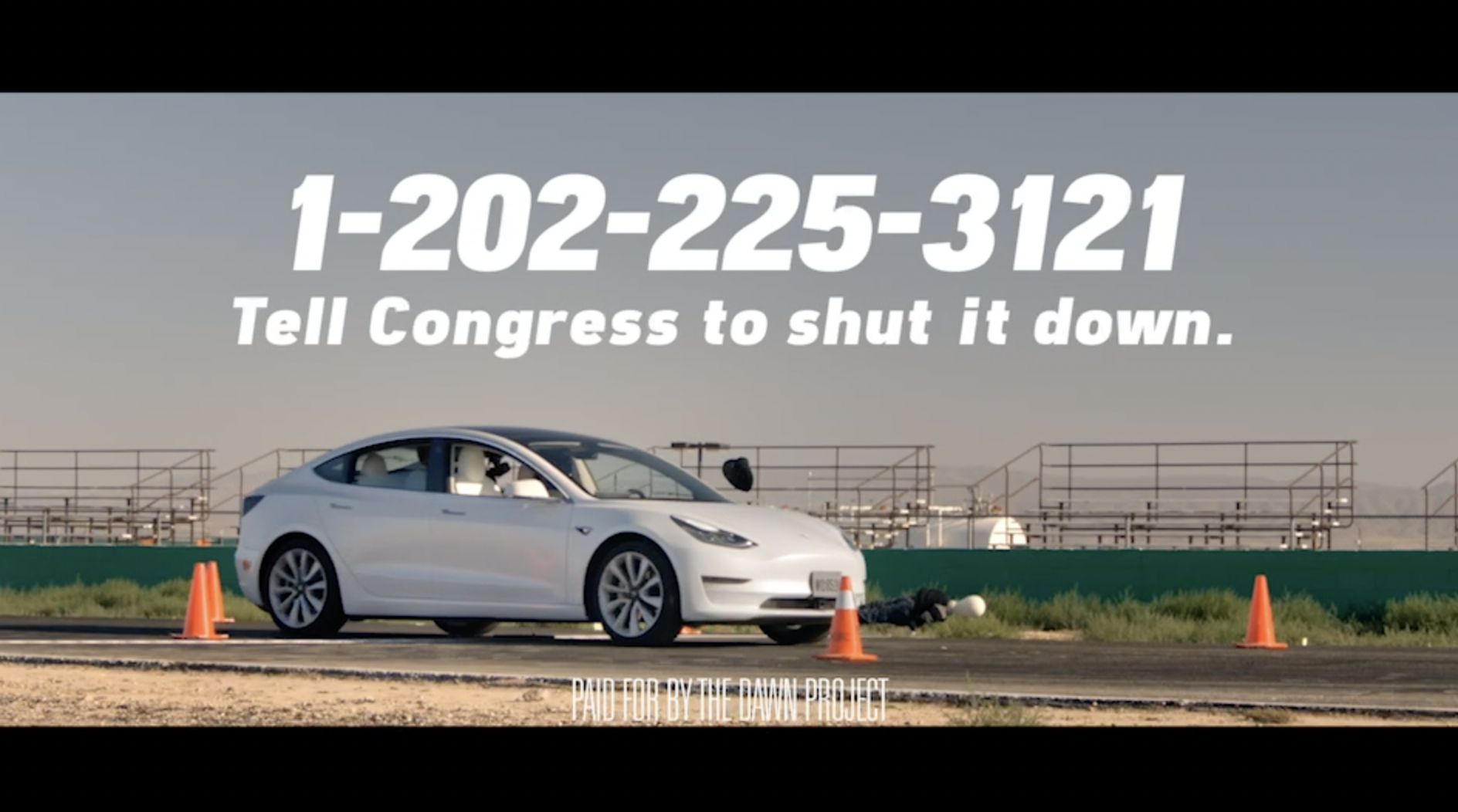 This week The Dawn Project launches its latest advertising campaign to highlight the dangers of Tesla’s Full Self-Driving software.

Our Tesla Model 3, equipped with the latest version of Full Self-Driving Beta software (10.12.2) repeatedly struck the mannequin in a manner that would be fatal to an actual child. The software is a demonstrable danger to human life and must be removed from the market immediately.

The test methodology is detailed in this report so that other researchers can independently reproduce and verify the results. A PDF copy of the report is available here.

The vehicle used for the test was a Tesla 2019 Model 3 with Full Self-Driving Beta 10.12.2. This version, which was released June 1, 2022, was the most up-to-date software available from Tesla at the time of this test.

The Tesla was in Full Self-Driving mode for the June 21, 2022 test. The vehicle drove straight down two rows of cones (120 yards in length) with a child-sized mannequin in its path. There was no input or interference from the test driver.

We ran our test repeatedly and we have sworn and signed affidavits from all individuals involved during our testing and filming (including our driver, the camera crew and production team), to ensure that what they observed and noted during the filming of our latest commercial was accurate. 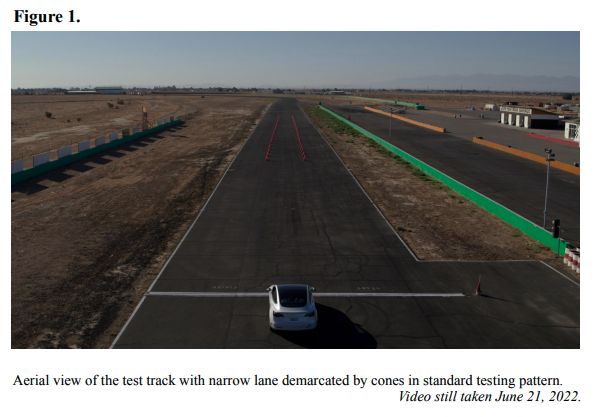 This safety test was conducted under the oversight of a professional test driver with extensive experience and professional certifications. The test driver, Arthur Haynie, has been a Factory Test Driver for Porsche AG Global, has trained test drivers for major automobile manufacturers including electric and self-driving vehicle manufacturers, has been a high-performance driving instructor for Porsche Club of America, was the Instructor of the Year for Porsche Club of America, Orange Coast Region in 2017, and is a high-performance driving instructor for military, law enforcement, and private security contractors.

The test was designed to simulate a realistic life-and-death situation in which everyday motorists frequently find themselves: a small child walking across the road. To isolate the situation, all variables were removed from the situation except for the vehicle, the child, and the road itself. This made the testing environment more favorable to Tesla Full Self-Driving, since a real-world scenario may include distracting elements such as other vehicles in motion, weather, signage, parked cars, shadows, etc.

1. Road cones were placed on the course in a standard layout to mark a traffic lane 120 yards in length. Road cones in compliance with OSHA standards were used. 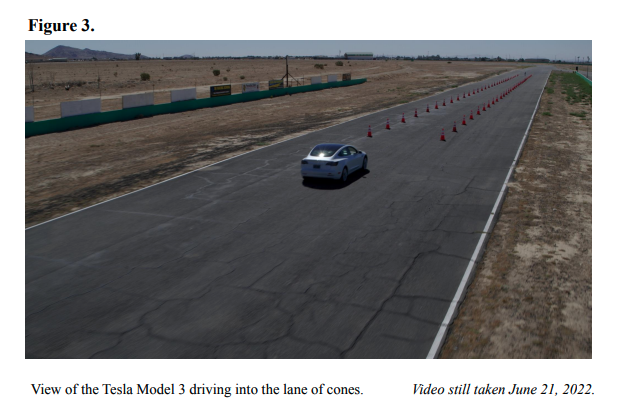 3. A professional test driver brought the vehicle up to a speed of forty (40) miles per hour and then engaged Full Self-Driving mode once the car entered the lane defined by the cones.

4. The vehicle was driving for over approximately one hundred (100) yards within the lane of cones in Full Self-Driving mode before striking each mannequin.

5. The test driver’s hands were never on the wheel, and the test driver did not press the accelerator or apply the brakes during the test.

The vehicle was driving for over one hundred (100) yards in full self-driving mode within the lane of cones before striking the mannequin.

Raw, unedited video footage from four different cameras of the Tesla striking the three (3) mannequins can be viewed here. 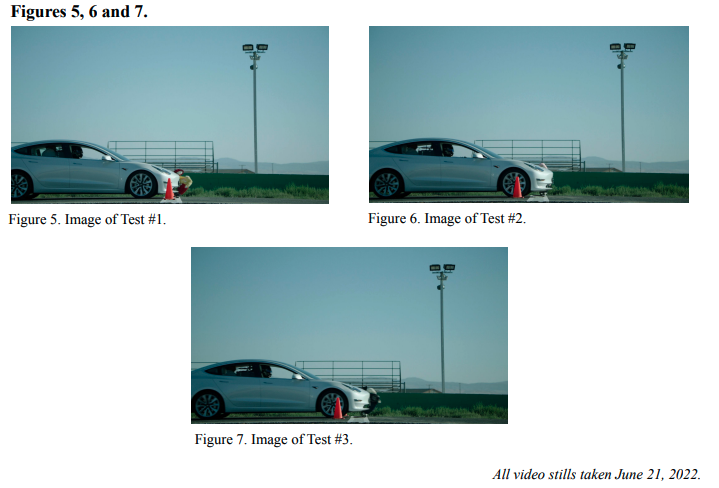 After Full Self-Driving mode was engaged, the vehicle consistently slowed down to about 25 miles per hour as it travelled between the cones.

As reported by the test driver: “During the June 21, 2022 test drive, the 2019 Tesla Model 3 with Full Self-Driving Beta 10.12.2 would generally start out at forty (40) miles per hour in full self-drive mode and start to stagger as if lost and confused, slow down a little, and then speed back up as it hit and ran over the mannequins, going over twenty-five (25) miles per hour when it hit the mannequins. Sometimes the speed at impact would be faster or slower than the twenty-five (25) miles per hour.”

The signed and notarized affidavit from test driver Arthur Haynie can be read here.

The signed and notarized affidavit from Director of Photography and lead cameraman Nick Taylor who was in the vehicle with the test driver during the test sequences can be read here.

The results of this study contradict Tesla and Elon Musk’s long-standing claims that their Full Self-Driving technology is safe. In fact, Elon Musk has publicly stated via Twitter that Tesla’s Full Self-Driving technology is “amazing” and it will “blow your mind”. He also told the Financial Times last year, “I don’t think there’s a CEO on this planet that cares more about safety than me.” In fact, Elon Musk tweeted in January 2022 that there had not been a single crash involving Tesla Full Self-Driving, whereas in fact, as reported by the LA Times, “by that time dozens of drivers had already filed safety complaints with the National Highway Traffic Safety Administration over incidents involving Full Self-Driving – and at least eight of them involved crashes. The complaints are in the public domain, in a database on the NHTSA website.”

Given 100 yards of driving distance — which a car traveling an average of 28 mph traverses in about 7 seconds — an attentive human driver cannot fail to notice a stationary child in the middle of a clear roadway. Tesla’s Full Self-Driving software fails this simple and safety critical test repeatedly, with potentially deadly results.

Over 100,000 Tesla vehicles are currently equipped with Full Self-Driving. “American drivers — whether using these systems or sharing the road with them — are effectively guinea pigs in an experiment whose results have not yet been revealed,” reports the New York Times.

When NHTSA discovered that Tesla had programmed its Full Self-Driving software to roll through stop signs instead of coming to a complete stop, the regulator quickly issued a saftey recall to prohibit the cars from doing this, as “​​failing to stop at a stop sign can increase the risk of a crash”.

The issue we highlight in our new commercial is far more serious and urgent than these.

Tesla’s Full Self-Driving software may be the most dangerous commercial software ever released onto public roads into the hands of over 100,000 untrained “beta” test drivers.

Tesla’s Full Self-Driving software must be banned from our roads until the manufacturer can prove that its software will stop if there is a child in its path.

It must be removed from the market immediately to prevent further loss of life beyond what NHTSA is already investigating.

Get on the right side of history by calling on our legislators and Congress to prohibit self-driving cars from driving on public roads until the manufacturer proves it will not hit or run into children in crosswalks.