What is the credibility and character of Omar Qazi @WholeMarsBlog? 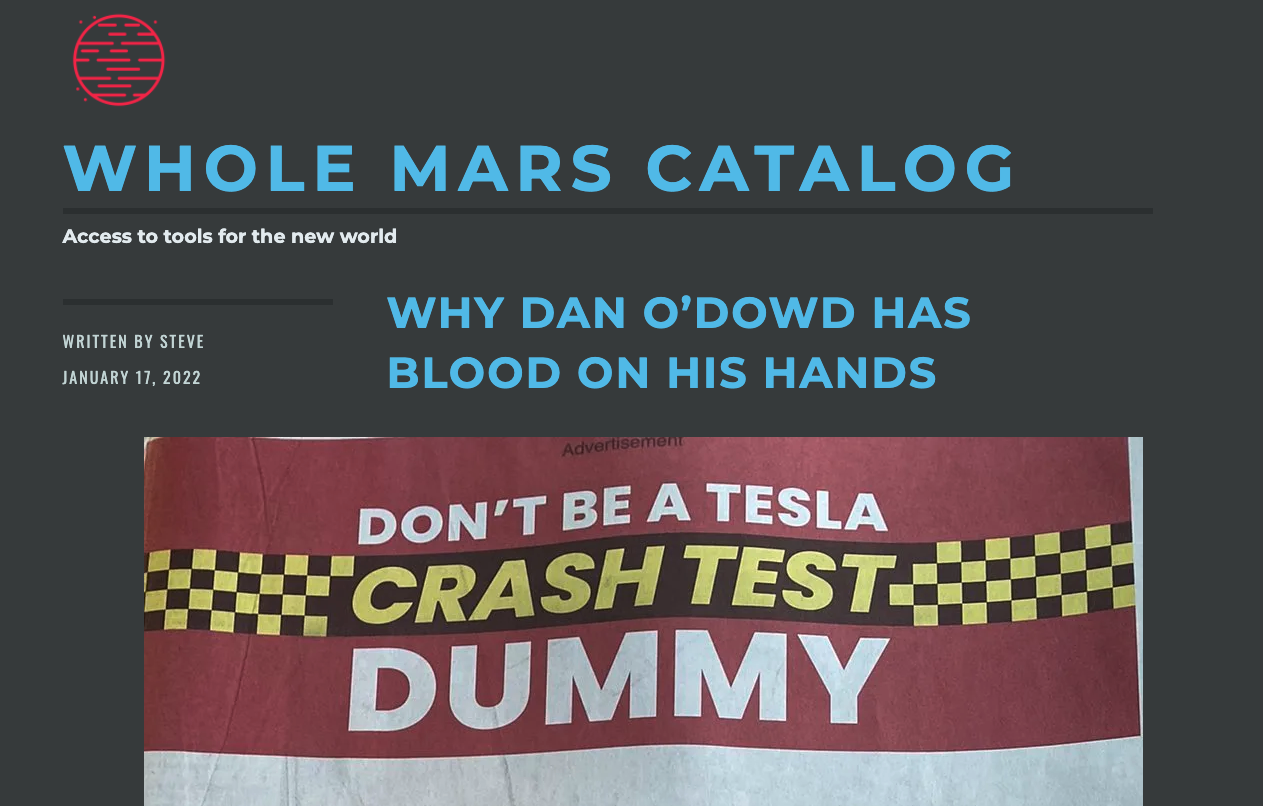 Knowing almost nothing about me, Omar Qazi @WholeMarsBlog published this lengthy attack.

At the end, he gave his Followers some good advice:

“Finally, I will close by saying I have no real problem with Dan O’Dowd or the people at Green Hills Software… To make our case strongly, we should attack the[sic] O’Dowd’s ideas rather than trying to bother him for spreading them. That means to be as nice as you can, don’t make anyone at Green Hills Software feel unsafe or uncomfortable or anything like that. Treat them with more respect than they deserve.”

He really needs to take his own advice because on the same webpage he said the following things about me:

Did Omar Qazi only attack my ideas?

Has Omar Qazi tried to not bother me for spreading my ideas?

Is Omar Qazi being as nice as he can be to me?

Is Omar Qazi making anyone at Green Hills Software feel unsafe or uncomfortable or anything like that?

Is Omar Qazi treating us better than we deserve?

What do you call someone who does not do what they tell others to do?

What do you call it when someone makes false accusations against someone else with obvious malice?

Who is right: Omar Qazi or the person at whom he is hurling vile insults?

To all of you who liked Omar Qazi’s attack on me before you read this, don’t you feel ashamed?

Are you the kind of person who applauds someone who hurls baseless vile insults at someone to try win an argument when they have no evidence at all, only raw prejudice?

Is this what you teach your children?

I read Omar Qazi’s “THE STORY” on his website. He was relentlessly bullied by Tesla short-sellers, filling his Twitter feed with negativity, identifying themselves only by made up names, etc. Now Omar is mobilizing his 50,000 Twitter followers to “boycott Green Hills Software” “urge others to do the same” “any small changes in the trajectory of the business – such as automotive falling apart – could significantly impact his wealth and ruin his upcoming retirement.” Does he think it is justified for him to incite a mob to destroy me just to make lots more money from his Tesla stock?

What does this say about his character?

Unlike almost all the other people that Omar Qazi and Elon Musk and their mob have ruthlessly bullied, harassed, and threatened into silence, they can’t touch me. I am fortunate to be able to afford to hire the lawyers I need to protect myself from them without losing my home. They can’t affect my mission, my job, my business, or my retirement finances. And I couldn’t care less what the mob says about me. I bathe in their fear and impotence. It only makes me stronger. I have the commitment and resources to ensure that every computer system that is not safe for humanity, Elon Musk’s Full Self-Driving being the most egregious, will be removed from the market.

By now, anyone reading this will have realized that Omar Qazi and his mob can’t be trusted. He is nothing but a propagandist. He will say any vile thing to put down anyone who won’t toe the party line.

If he attacks you and he had any evidence at all that he is right or that you are wrong, he would have used that evidence to debunk your position instead of insulting you. When he insults you, everyone knows that he is admitting that what you said was right and that it devastates his position. He is also admitting that he and his mob are afraid of you. If they weren’t afraid of you, they would just ignore you. So, you shouldn’t feel intimidated by them. Bathe in their fear and impotence. It will make you stronger so you can redouble your effort to get the truth out.

Next time @WholeMarsBlog or his mob insults you just reply with a reference to this webpage.

Then Omar Qazi @WholeMarsBlog will fade back into insignificance.