The Dawn Methodology has been developed by our Founder, Dan O’Dowd. Dan has dedicated his life to studying software development. That experience underpins The Dawn Methodology and its supporting technology. Dan has written the software for hundreds of the world’s most safety-critical and security-critical systems. In aerospace and the military these include Boeing’s 787s, Lockheed Martin’s F-35 Fighter Jets, the Boeing B1-B Intercontinental Nuclear Bomber, and NASA’s Orion Crew Exploration Vehicle.

After studying why operating systems contained so many bugs and security defects, Dan developed The Dawn Methodology to design a new operating system from the ground up that could run on any computer system. Its primary requirement is that it must never fail and it must never be hacked. It must also perform the functions required completely accurately and safely. The Dawn Methodology ensures that until a feature has been rigorously tested and proved to be reliable, safe, secure, and absolutely necessary, it will not be incorporated into the operating system.

Dan developed The Dawn Methodology to deliver on the contract he won with Boeing to develop the system for the B1-B intercontinental nuclear bomber in 1997. The system controls everything in the plane including flight control, navigation, comms and the weapons system. After years of studying why operating systems have so many bugs and security defects, he designed a new one from the ground up. Its only design requirement is that it be secure.

No trade-off is ever made between features and security. Until a feature can be proved reliable and secure it will not be incorporated into the operating system. The operating system is minimalist, does nothing other than what it must absolutely do. It is capable of doing everything that other operating systems can do, and it can run on any computer system. Dan wrote it, delivered it to Boeing and supported it until it was flying.

Recently, Dan used The Dawn Methodology to build an unhackable laptop for the FBI, an unhackable cell phone for the military, and to secure safety systems in every General Motors car for model years 2020 to 2023.

None of these systems has ever failed or been hacked. That is the way to develop the software for the systems that our lives depend on.

Safety-critical and security-critical systems on board these aircraft were designed using The Dawn Methodology:

Debugging is the process of finding the bugs (errors) in a program. Programmers spend most of their time inefficiently and ineffectively debugging with primitive tools that have advanced little in the last 30 years. Many simple errors can take days to track down. Most bugs are never found.

If someone never studies debugging, they aren’t ever going to figure out how to write software that never fails and can’t be hacked.

Our People Are Armed with the Most Advanced Software Development Tools

Every company claims they have the best people in the world. But there can only be one best.

Special Forces can do things that the regular military can’t. They move fast and silently, hit hard, accomplish their objective, and then disappear.

The Dawn Project personnel are the Special Forces of software.

Dan recruits only the best students from the best colleges and universities. Then he puts them through a battery of tests like no other company.

The best of the best want to work for Dan because they get to do the most important programming work in the world. They get trained by Dan and directly interact with him, a billionaire entrepreneur who has developed dozens of revolutionary products. Dan also gives them the best equipment in the world. His people are armed to the teeth with the most advanced software development tools that allow them to track down every bug quickly, keeping them a decade ahead of everyone else in software development technology.

Dan offers the most prestigious programming jobs in the world. His people parachute into a customer’s development team and quickly identify and fix problems that may have overwhelmed the company for months.

The most senior Dawn Project personnel—our Special Forces of the Special Forces—know vastly more about software security, debugging, design, testing, performance, and programming methodology than anyone else.

At the top of the training structure is Dan. He conceived, designed, managed, and/or implemented all the company’s software development technology. Dan interviewed and hired every programmer on The Dawn Project. He developed The Dawn Methodology, which is the only way known to develop software that never fails and can’t be hacked. Dan used The Dawn Methodology to design and develop hundreds of the most safety- and security-critical systems, none of which have ever failed or been hacked.

Why Understanding Technology Is The Key To Success

At Gates’ competitors, the most technically knowledgeable people were the programmers who implement the technology—people at the very bottom of the organization chart. The first-level managers knew less than programmers. They got their jobs because their social skills exceeded their technical skills or they had been good programmers, but after a few years of managing, their programming skills began to atrophy and advances in technology rendered their knowledge increasingly obsolete.

At the next level, former programmers learned that spending more time on politics and social activities instead of keeping up their technical knowledge is the key to getting ahead. After 10 years away from the front lines of technology, they had few skills relevant to the latest technology. As former programmers move up the corporate ladder, technical skills continue to drop off until you reach the CEO, who often knows relatively little about the technology that the company’s value is based on.

The large-scale technology decisions that fundamentally determine future success or failure are ultimately made at the top of the organization by people with little or no understanding of the technology the company is based on.

How is the CEO supposed to decide between deep learning, artificial intelligence, block chain, or quantum computing for their fundamental self-driving car technology? Advocates of each of these approaches will passionately present them to the CEO using charts and graphs, projections, cost estimates, delivery dates, and performance claims. But the CEO cannot evaluate any of that. Their choice of future technology is a crap shoot meaning that in five to ten years the company will probably have failed.

From his lengthy internal memos on Microsoft’s technology directions, it is clear that Bill Gates was intimately familiar not only with all of Microsoft’s technology, but with all its competitors and emerging technologies as well. With all this information, he could make good decisions about which technologies to pursue and which to avoid. But his competitors’ CEOs were far less equipped to take the most important decisions a technology company can make. So, he said it was easy for him to beat competitors a hundred times his size. Following this simple dictum, Bill Gates led his Microsoft to become the most valuable company in the world.

Technical Inversion Enables us to Beat Much Bigger Competitors

Dan leads The Dawn Project. He knows more about developing software that never fails and can’t be hacked than anyone else. He has designed, managed, or directly implemented all The Dawn Project technology and he makes all the decisions regarding technology development. The managers below Dan have been steeped in this technology for over 20 years. They know far more about software development than the people below them in the organization chart. And so on down to the lowest level. But even at that level, we have nothing but Special Forces class programmers.

Some of Dan’s competitor firms are much larger, but they are technically inverted. That is why Dawn can succeed at what most would perceive to be an impossible task. Dan’s competitors have no idea what technology to pursue. They have become buzzword-driven marketing companies with no viable technology. In a technology business, bad technology always loses.

Dan has learned the valuable lesson that Bill Gates credited with making his company the most valuable in the world: avoid technical inversion. 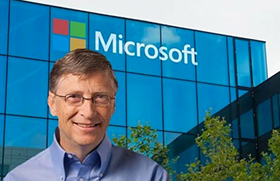 Bill Gates once observed that, at his competitors, technology decisions were made by people who knew the least about technology. The people with the most technical knowledge had no say in these key decisions. He called this technical inversion.