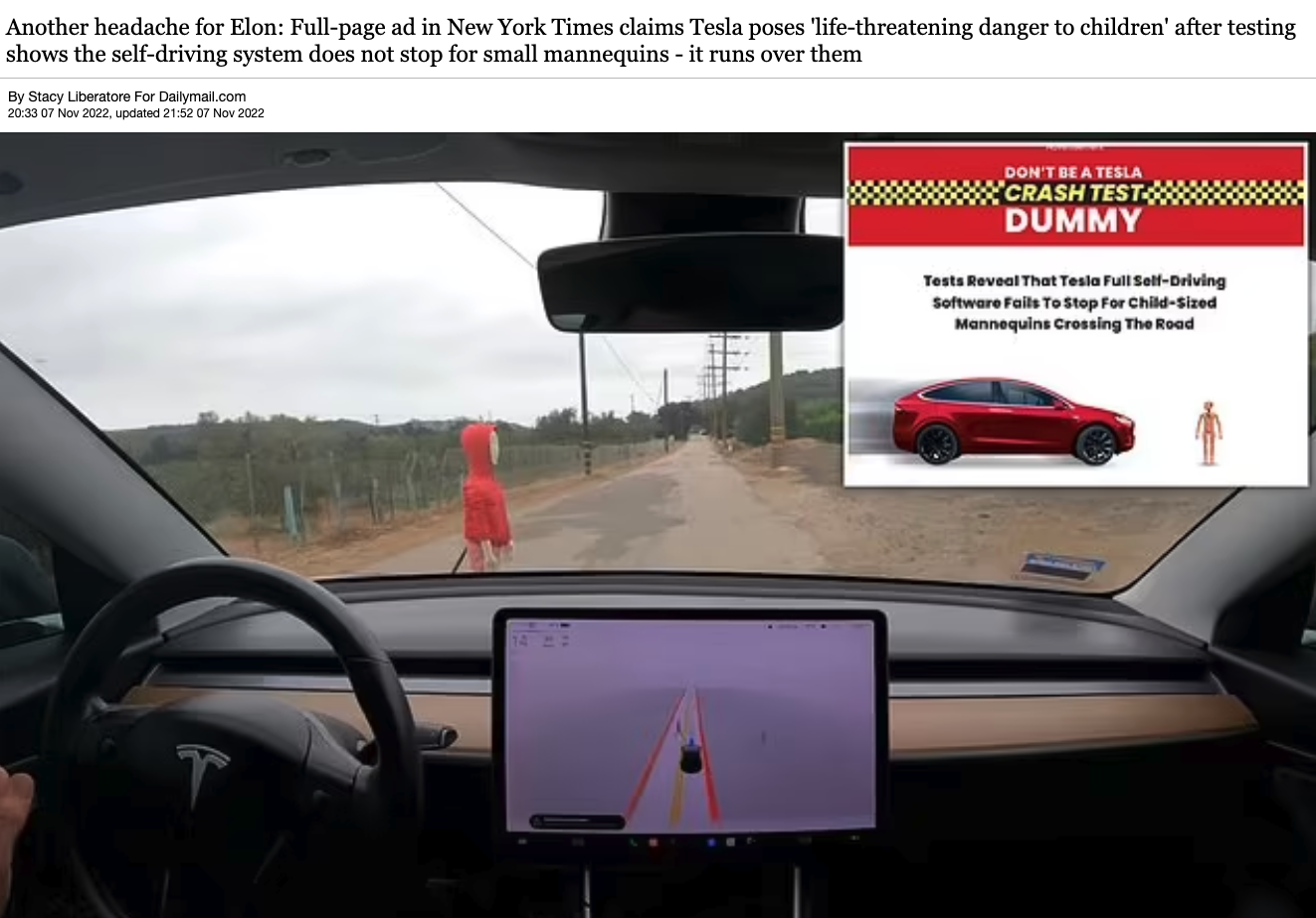 The Dawn Project’s Full-Page Advertisement in The New York Times has been covered in the Mail Online, highlighting the dangers Tesla Full Self-Driving poses to child pedestrians.

The article was published in the Mail Online on 7 November 2022, and can be see here.

As if Elon Musk did not have enough on his plate with Twitter, Tesla is now under fire in a full-page advertisement in the New York Times that warns its ‘Full Self-Driving presents a life-threatening danger to child pedestrians.’

The ad, which cost about $150,000, is from software maker The Dawn Project and claims to highlight safety testing conducted by the firm in October. A video of the experiment suggests the system does not register or stop for small mannequins crossing a road, according to the group.

The testing involved a man driving in a Tesla on a back road and running over child-size mannequins in his path.

Using the Tesla Full Self-Driving Beta 10.69.2.2, which is the latest version of the system, the vehicle collided with a 29-inch mannequin at speeds as low as 15 miles per hour and it ran over a four-foot-tall one at 20 miles per hour.

The Dawn Project conducted a similar test in August and notes the new results confirm those shared in the commercial, which sparked Tesla to send a cease-and-desist order over.

Dan O’Dowd, the billionaire behind The Dawn Project, narrates the August video and calls for Tesla Full Self-Driving Beta software to be banned from the road, saying Tesla’s software is ‘the worst commercial software I’ve ever seen.’

The responding letter accused O’Dowd of ‘disseminating defamatory information to the public regarding the capabilities of Tesla’s Full Self-Driving.’

However, The Dawn Project has now shared the results in an advertisement that also includes a survey it conducted with the public to get their take on how safe Tesla’s system is.

‘Our survey shows that 93 percent of registered voters agree that a Full Self-Driving car that would run down a child in the road must be banned from our roads immediately,’ O’Dowd shared regarding the October findings.

‘We publicly demonstrated it would do that three months ago and it still does it today.

‘Why didn’t National Highway Traffic Safety Administration (NHTSA) or the Department of Motor Vehicles (DMV) recall this product months ago, in accordance with the will of the people?’

The founder continues to rhetorical ask ‘how many children need to die before NHTSA or the DMV will implement the will of the people?’

The experiment was conducted with what looks like a black Model 3 that is being operated by a man at the wheel.

He activates the Full Self-Driving system, taking his hands off the wheel to show it is operating, and begins cruising along a windy, back road.

He drives up the road to where a small mannequin is being pulled across the road, in which the Tesla speeds over the obstacle and keeps driving.

And this again happens while the vehicle is cruising at 50 miles per hour.

A third time the Tesla is traveling at 20 miles per hour, runs over the dummy and its head flies up over the windshield.

The issue, according to The Dawn Project, is that the system does not pick up on the 29-inch mannequins, which can be deadly in the real world.

‘By now Elon Musk, the Tesla engineers, and the Board of Directors of Tesla all know that their product will mow down a child walking in a crosswalk,’ O’Dowd shared in the advertisement.

‘Yet they continue to recklessly sell and distribute a product that they know is defective and deadly.

‘They continue to direct the resources of the world’s richest man to churn out new features and conveniences for their Full Self-Driving product, but not to fixing its deadly defects.’

The first video in August sparked NTSA to open an investigation into Tesla’s Autopilot active driver assistance system, but the safety group is either still working on it or has since given up on the investigation.

In February this year, Tesla recalled nearly 54,000 cars and SUVs because their full self-driving software was found to let them roll through stop signs without coming to a complete halt.

The over-the-internet software update, which was being tested by a number of drivers, allowed the vehicles to go through junctions with a stop sign at up to 5.6 miles per hour.

January 22, 2018 in Culver City: A Tesla Model S hit the back of a fire truck parked at an accident in Culver City around 8:30 am on Interstate 405 using the cars Autopilot system. The Tesla, which was going 65mph, suffered ‘significant damage’ and the firetruck was taken out of service for body work.

May 30, 2018 in Laguna Beach: Authorities said a Tesla sedan in Autopilot mode crashed into a parked police cruiser in Laguna Beach. Laguna Beach Police Sgt. Jim Cota says the officer was not in the cruiser during the crash. He said the Tesla driver suffered minor injuries.

The police SUV ended up with its two passenger-side wheels on a sidewalk.

The Tesla driver, Derrick Monet, and his wife, Jenna Monet, both suffered serious injuries and were transported to the hospital for immediate medical care. Jenna ultimately succumbed to her injuries and was pronounced dead at Terre Haute Regional Hospital.

July 15, 2020 in Conchise County, AZ: A Tesla Model S hit an Arizona Department of Public Safety patrol car, resulting in the patrol car rear-ending an ambulance that was on the scene of an earlier car accident. No one was seriously injured, but the Tesla driver was taken to the hospital for injuries.

August 26, 2020 in Charlotte, NC: A Tesla driver watching a movie crashed into a Nash County Sherriff’s Office deputy vehicle in Charlotte, North Carolina on US 64 west.

The driver, Devainder Goli, of Raleigh, was accused of violating the move-over law and watching television while operating a vehicle.

The Tesla driver was not injured, but was taken into custody on a DWI charge.

March 17, 2021 in Lansing, MI: A Tesla on autopilot crashed into a Michigan State Police car. Troopers from the Lansing Post had been investigating a crash involving a car and a deer on I-96 near Waverly Rd in Eaton County at around 1:12am.

While investigating the crash, a Tesla driving on autopilot struck the patrol car, which had its emergency lights on.

Neither the driver of the Tesla – a 22-year-old man from Lansing – nor the troopers were injured at the scene. Police issued the unidentified man a citation for failure to move over and driving while license suspended.

May 15, 2021 in Arlington, WA: A Tesla driving in Arlington, Washington hit a police vehicle that resulted in ‘significant damage’ to the police car.

There were no injuries reported from the incident.

May 19, 2021 in Miami, Florida: Three people were hospitalized after a Tesla hit a parked Miami-Dade County Department Transportation Road Ranger truck that was blocking the left lane of I-95 to help clear the debris of an earlier crash.

The driver of the Tesla was transported to a nearby hospital with with severe, albeit non-life-threatening, injuries.

July 10 2021 in San Diego: A woman drove her Tesla onto a stretch of Highway 56 that had been closed to investigate an earlier fatal accident. That saw her Tesla smash into a parked, unoccupied highway cruiser.

The woman was arrested on suspicion of DUI, and her passenger was injured.

August 28, 2021 in Orlando: A Tesla Model 3 struck a Florida Highway Patrol cruiser that had pulled over to help a broken-down car. The 27 year-old driver and his passenger both suffered minor injuries. The trooper did not get hurt.